« You Can Create Some Challenges with DIY Wills | Main | Inheritance War? Perhaps a Widowed Stepmother Is Behind the Scenes »

No-Contest Clause Can Solve Issue and/or Create One 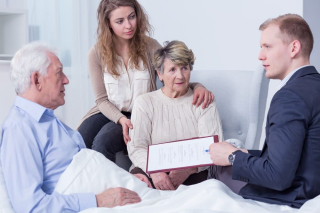 Will a no-contest clause prevent a challenge? That’s the big question.

The last will and testament is the key to the final wishes of the loved one. However, when charges of undue influence occur, problems can also arise that stall the end results, according to the Santa Cruz Sentinel in “No-contest clause throws kink into trust plan.”

The example given in the article is of a woman whose mother was in the care of her niece, who was also the trustee of her mother’s trust. The mother modified the trust to give the niece her home, which is estimated to be worth about a fifth of the total estate value. The daughter notes that at the time these changes were made to the will, her mother was in hospice care and being given morphine. It does sound as if it could be influence, because changes made to a will during a critical illness, especially in the presence of strong pain medication, are questionable.

Since the trust included a no-contest clause, the daughter wonders if it’s worth challenging the will for one-fifth of the estate to charge the niece with undue influence?

An undue influence claim needs to have three points:

If all three elements are met, then the burden of proof shifts to the niece to show that she was not doing anything wrong.

There may also be a lack of capacity claim, based on the medication. It may be that the grandmother was too medicated to understand what she was doing.

The no-contest clause does present a problem. If the will is challenged, the daughter is disinherited — but only if she loses. If she wins, that no-contest amendment is invalid, and the trust returns to what it was before the changes were made.

At one point, no contest clauses were so powerful that there was consideration given to not allowing them to be used in wills. In California, as of Jan. 1, 2010, a person may file a contest and if the judge determines that they had probable cause, they are not automatically disinherited.

In this case, if the facts would lead a reasonable person to conclude that there was undue influence, it’s likely that the daughter in this example would win. It would be up to the court to determine whether she should be disinherited. No-contest clauses are strictly construed by the courts, so unless the no-contest clause says that it applies to amendments, she may be okay.

There is one fact that she needs to ascertain, before moving forward. If the estate planning attorney met with the mother and prepared the amendment, then the attorney will be a neutral witness who will be able to testify to her mother’s mental capacity and her wishes.

It is not uncommon for people to change their wills to favor the person who spends their last weeks or days with them, as they prepare to die.

Any of our estate planning attorneys would be happy to advise you on creating an estate plan that fits your unique circumstances.